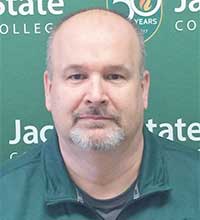 Deron Hines enters his 19th year as Jackson State’s Head Men’s Basketball Coach. Coming off a 17-11 record during the 2016-17 campaign, he has compiled a 278-176 record during his tenure and stands as the Generals all-time winningest coach.  Hines has led the Generals to two TCCAA Western Division Championships, a TCCAA State and Region VII runner-up, and has been honored as state and region coach of the year.  He has placed 49 former Generals at 4-year schools.