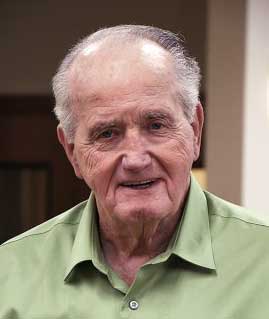 You'll find his name on the Walter L. Nelms Classroom Building, his mark on the academic quality in the classroom, his pride in the thousands of students who graduated from the community college, and his influence on Jackson State's growth as it added programs and degrees to educate students for local jobs.

Dr. Nelms never tired of promoting the college that defined his life. "I love to talk about Jackson State," he said in an interview five years ago. "It's my baby."

Indeed, Dr. Nelms played a role in the birth of Jackson State. Hired as the first Academic Dean, he and his long-time secretary Ann Crossnoe worked out of a house on Airways Boulevard with other Jackson State staff members before the college opened for fall classes in 1967. Dr. Nelms and Crossnoe spent the summer hiring faculty, buying textbooks, and creating an academic class schedule.

His relationship with Jackson State began earlier in a Memphis State University classroom as the community college movement exploded across the country.

He was teaching a course on junior and community colleges. "I was selling students on a community college career," he said. "One day after teaching that class, I was getting a haircut. I remember sitting in the chair and thinking it was a good opportunity for me, too."

He was hired by then Jackson State President Dr. F.E. Wright in June 1967.

Dr. Nelms already knew Jackson. His father worked for the Illinois Central Railroad. He spent part of his youth in Jackson and graduated from Jackson Central High School. He left Jackson to earn his bachelor's and master's degrees at Harding University in Arkansas. He then taught for two years in Arkansas, joined the U.S. Marines for another two years, and earned his doctorate in education from the University of Mississippi.

Dr. Nelms considered community colleges "the best bargain in education." At $55 a quarter for full-time students, the new college made a post-secondary education affordable and opened opportunities to many in West Tennessee.

The early curriculum was mainly general courses students needed to get an associate degree, but technical courses were already becoming available. Old Hickory Mall had just opened, and Dr. Nelms remembered a one-week course that taught how to operate an electronic cash register.

It wasn't long before business and medical-related programs were in the curriculum. At the time, Dr. Nelms said, business and technical courses were reserved for vocational schools, but now students could get two-year degrees in these fields and enter the job market.

He was instrumental in the growth of the nursing and other health sciences programs at Jackson State. He was also quite proud of the opening of the Ned R. McWherter Center for Advanced Industrial Technologies. The college had a state-of-the-art building for the courses it offered to meet the needs of area industry.

Industries locate here because of Jackson State, Dr. Nelms said. He added proudly that the medical community could not have grown as it has without Jackson State feeding it with people skilled in the medical field.

Dr. Nelms' influence on Jackson State was felt in other ways, too. While many institutions were still segregated in the late 1960s, Jackson State was not, he said. From the beginning, African-American students were welcome, and he sought out minority teachers. "By the second year, our faculty was integrated."

Dr. Nelms became Jackson State's president in 1976 after the unexpected death of Dr. F. E. Wright. He guided the college until his retirement in 1997. However, his service to the college did not end upon retirement. Dr. Nelms stepped into the President Emeritus role. He continued to be one of Jackson State's biggest fans and supporters; he attended graduations and was a frequent sight at campus events.

Dr. Nelms accomplished so much during his tenure as president of Jackson State Community College, said Heather Freeman, who works in the Office of the President and got to know Dr. Nelms well in his years as President Emeritus after his retirement.

"I believe his legacy is the number of lives changed by his years of leadership," Freeman said. "He worked to ensure the inclusion of all that wanted an education. However, inclusion was just the first step. As the college opened, Dr. Nelms proudly recruited a diverse faculty and staff devoted to teaching and student success. He understood that each student faces a unique college journey. His passion for education called for all faculty and staff to recognize our role in helping each student achieve their individual college goal."

"Dr. Nelms knew the impact of the achieved educational goal far outreached the number of graduates that proudly walk across the stage at Jackson State's commencement ceremonies," Freeman added. "It reaches their children, employers, community, and state. There is no way to count the lives benefited from his dedication to education."

"Dr. Nelms was a calming force throughout his years at Jackson State, said college Library Director Scott Cohen, who has known Dr. Nelms since he started at the college in 1972. "He was a giant of a man, yet he never lost his temper with his employees."

Dr. Nelms was always proud of Jackson State - its programs, graduates, and relationships with local businesses and industry. He was most proud of the community college's faculty and staff. "We're in the business of teaching. The most important part of Jackson State is the faculty, who put their heart and soul into teaching. I'll put the quality of Jackson State's programs up against any other program."

Looking back on his career, Dr. Nelms said he was "thankful every day" for deciding to work at Jackson State.

"Eternally," he said, "I am going to be here. My heart and soul are here. They always have been. I'm just proud of Jackson State."

The Jackson State family extends our deepest sympathies to the Nelms family as we all mourn his loss.